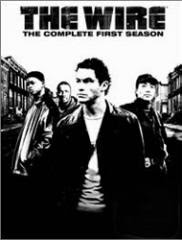 Apologies on the lack of posts this week folks. Unfortunately, I caught the flu bug and have been out of it a bit. The only saving grace is that I've watched 11 episodes of The Wire in the last 24 hours, and let me tell you, it is amazing. I can't stress this enough. Start renting now.

Supposedly this New Yorker profile of David Simon, one of the creators of the Wire is really awesome. I haven't read it yet, but I plan to.

Finally, I thought I would bring Merrill Lynch's monster write-down to your attention. The firm is writing down about $8 billion, with a "B", of mortgage related bonds. Here is the Wall Street Journal's coverage. Merrill's existing exposure is still about $12B -$15B on these type of debt instruments, depending on whose numbers you use. Kudos to Merrill for aggressively writing down these instruments, but there is probably much more to go. At the same time, there are a lot of finance companies with huge exposure in this area that aren't being proactive. Expect write-downs up the wazoo later in the year.

No matter how you slice it, credit markets and aggressive lending have powered the U.S. economy for a very long time. It's going to be tough to sustain growth while finance companies pay for their past sins and the credit markets return to more normal behavior.
Posted by Unknown at 10:04 PM