Dear Readers, as George Costanza would say, "I'm back, baby!"

I was knocked out there with the flu for quite a few days but I've returned to good health. Let's just say I haven't been the most active person lately, but I have watched a lot of TV and read the final chapter in Mr. Harry Potter's story. One more thing, you know I'm right when I'm quoting Costanza. File that in the back of your mind.

Harry, what can I say, you never disappoint. He's the man, pure and simple. If you haven't started reading Harry Potter, the Star Wars of the new generation, then you are a lucky person. Don't Fear the Youth! Start reading Harry today.

Chuck Klosterman spilled some ink on Harry Potter in this month's Esquire. Chuck is a pro and writes about 5,000x better than I do, but he wrote an article about something he hasn't read and experienced. Umm, isn't that why we have editors? Come on Chuck, you're better than that.

While you're skimming Chuck's article in Esquire,

devote your full time to my friend Matt Belloni's article on Diablo Cody, a woman who worked as a stripper for a year because she was bored with her corporate day job. She knocked out a book after the experience. Cool article. She's also a blogger, and writes Pussy Ranch (no joke on the name).

On to the Wire, 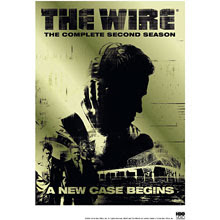 what can I say? It's pretty freaking unbelievable. The writers changed the whole focus of the story in Season 2, and still pulled it off. It's a must rent. Beware though, it takes a couple episodes to get into each season. The secret of the show is how well they develop all the characters. You come to really care what happens to them, even the drug dealers and crime bosses. I'm not saying they're likable, you just care. In fact, the Cops and Drug Lords aren't so different...

I'm getting towards the end of Season 3, and I'll give you an update when I finish.

By the way, if you have been debating watching the Wire, you should know that there is a certain element of personal redemption you can find in it. You see, Beth Stevens was not too happy about my John Mayer recs, but she agreed to forgive me because I love the Wire so much. Redemption on earth people...by watching TV. Awesome.
Posted by Unknown at 2:37 PM