Best Movie Ever: Into the Wild

Continuing my Best ___ Ever series is a movie I saw Sunday night called Into the Wild. Ladies and Gentleman, this is a good one! 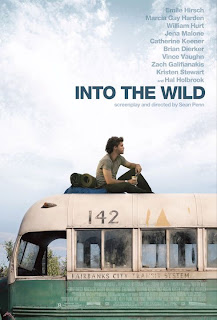 The movie was done by Sean Penn and features Emile Hirsch who looks like Leo circa Titanic, but boy can he act. Here is the trailer but I don't think it does the movie justice.

The reason the trailer isn't great, is because the best parts of the movie are the interactions Chris (Emile Hirsch) has with characters along the road, which take time to build, and his moments in Alaska where he does something quirky, funny or really meaningful. Mick LaSalle of the SF Chronicle says it better than me. The trailer is trying to show action, whereas what makes the movie great is capturing the act of going Into the Wild.

One other thing, Mr. Eddie Vedder did the soundtrack for this movie and Eddie's voice and guitar (& ukulele) strumming compliments the visuals and speaks for the character very nicely. Here is the video for Hard Sun:


My favorite combination of music and movie is the mountain climbing scene, which could have easily turned into a cheesy, Rocky Balboa on top of the mountain in Russia moment.

Instead, the kid's face is poetic, and Vedder's "The Wolf" plays to our emotions.

This combo is memorable to me, because it brought back a way of listening to Vedder's cries that I hadn't done for a long. When I was Hirsch's age, I would listen to Pearl Jam and sing along, in a sort of catharsis and celebration combo. Well, that is what Hirsch is doing here and it brought me way back, to my younger self and a renewed appreciation for Eddie.

Let's finish off that deep thought with a couple songs that I like from the soundtrack and a link to a great Charlie Rose interview with Penn & Vedder.

Charlie Rose - A discussion about the film "Into The Wild"
Posted by Unknown at 5:25 PM