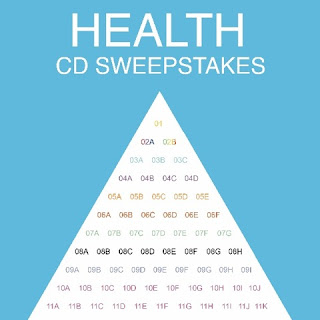 The band Health is a hot indie group and my buddy Andrew Miller's brother plays drums. This band ROCKS but it's not for the faint of heart. I caught them at South By Southwest 18 months ago and was blown away by their performance. The drums power the band so I was especially happy for Andrew. I was exchanging some emails with Andrew and he told me about Health's Willie Wonka promotion with their new album. It's a really cool idea. Great job guys.

"The quartet's also running a playfully self-absorbed Willy Wonka-inspired promotional campaign. The idea: HEALTH made 66 tickets and hid them in the first shipment of Get Color CDs. Each includes a unique code that corresponds to a specific prize. One "Golden Ticket" (aka Grand Prize) earns you a 3-night trip to LA. We're told if you win this, your "every whim will be attended to," but I assume there are limits. For now: "Details include accommodation at a band members homestead, as well as various meticulously planned activities culminating in a trip to Six Flags amusement park."


Here are a couple samples of Health:


Crimewave
Posted by Unknown at 6:00 AM