Tim Goodman writes incredible Mad Men recaps and this week's version was amazing. I loved the episode's exploration of generational shifts and Goodman enlightened me on a bunch of stuff that I didn't see. Before you read on, there is a minimal spoiler, not something big at all, but just giving you fair warning. 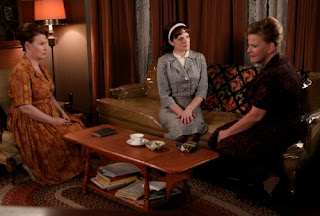 My favorite part of the episode was the scene where Peggy tells her mom she's moving to Manhattan and her mom is anything but supportive. This scene reminded me of the story my grandparents told me about their move to Fremont from Oakland. My grandmother is 100% Italian and the extended family was everything in her life growing up. About 40 -50 family members lived within a few blocks of each other in Oakland and would get together every sunday for a Italian feast. My grandparents moved to Fremont because they could own a house. Land was cheap amongst the orchards and they bought in a small sub-division where they have lived ever since. My grandmother told me that the family threatened to dis-own her at the time but she felt like it was the right thing to do.

This is one of the beauty's of Mad Men, it gives us a peak at the past. The world has changed so much that's it hard for us to imagine Peggy even worried about moving to Manhattan. I made a similar move from the East Bay to San Francisco after college, and never gave it a second thought. But in Mad Men, there is the conflict on film, corroborating the stories of generations past.
Posted by Unknown at 6:00 AM