Thanks to Scott Fausel for sending along this link to a post on Bear Talk about the standing ovation that CAL fans gave Oregon State coach Craig Robinson last Thursday. 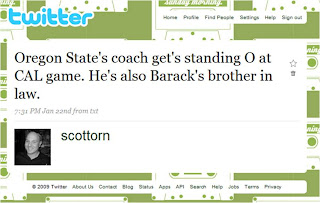 “All of a sudden, the clapping doesn’t subside and I don’t see their team coming out and I realized they’re clapping for me,” said Robinson, who is brother-in-law to new president Barack Obama. “I got to tell you, I was completely taken by surprise. It was almost as emotional as being at the inauguration. That kind of outpouring, I’m not used to.

“It says a lot about the student body, it says a lot about the fans at Cal. I was quite moved. Listen, I was as choked up as I’ve ever been. I had to fight back the emotions because we had a game to play. When I tell you I was taken by surprise and moved, I can’t explain it because I’ve never been a part of something like that.
Posted by Unknown at 6:00 AM