Every year Matt Belloni puts together his favorite songs of the year. I eagerly wait for his selections and then assemble them on a mix CD. As I write this, I'm listening to Belloni's Best of 08' and it's great. I've taken the liberty of putting all the songs but one on a Favtape, so you can listen to them. 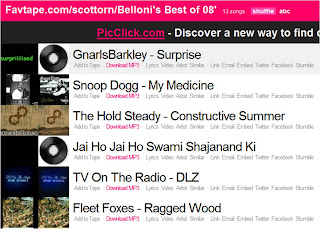 http://favtape.com/scottorn/Belloni%27s%20Best%20of%2008%27/shuffleMatt was kind enough to write a few words on each selection. Matt is not a music critic, he only plays one on TV. The list is meant to be taken in the spirit of Nick Hornby's High Fidelity mixes, as in not too seriously.


1. "Float," Flogging Molly - This would have made any of my lists. But with the world going to hell in 2008, I'd vote this odd beer-swilling anthem the song of the year. Drink, that's all you can do.

2. "Constructive Summer," The Hold Steady - I've heard them described as the bar band in heaven. Sounds about right. I didn't love this album as much as "Boys and Girls in America," but I dare you to have a bad time while the Hold Steady are playing.

3. "DLZ," TV On the Radio - I wish I was 1% as cool as these guys. Or maybe I wish that this song started playing every time I got off the elevator at work.

4. "Man-sized Wreath," R.E.M. - Who would've guessed I'd enjoy an REM album as much as anything released in 2008. They're the Mickey Rourke of guitar bands, and I welcome them back to relevance. Same sound, and Michael Stipe's voice and lyrics have gotten far more interesting with age. Great line: "If nature abhors a vacuum, then what's between your ears."

5. "Run to Your Grave," The Mae Shi - We caught the very end of their set at SXSW and I was surprised to find myself humming this song the next morning. Then I downloaded it and realized it's the catchiest track of the year.

6. "Weekend Wars," MGMT - Hard to believe this album came out in '08. A bunch of great songs, like "Kids" and "Time to Pretend," but this one gets my vote probably because I'm not sick of it yet.

8. "L.E.S. Artistes," Santogold - Santi White worked in A&R for a label then went and made her own record with an amazing single. It's interesting that this doesn't happen as often in the arts as it does in other areas of business.

9. "M79," Vampire Weekend - Fine, ladle on as much shit as you'd like. I don't care that it was probably blasted from the roof of every frat house on Warring, this album (and this song, probably its most maligned) are great.

10. "Ragged Wood," Fleet Foxes - I'm not a big My Morning Jacket fan, so if there's ever a steel cage grudgematch to crown a mainstream alt-folk jam band champion of the world (and, Lord willing, there will be...and NBC will televise it), I'll be rooting for Fleet Foxes.

11."I Was Made for You," She & Him - Orn, either I'm becoming more sensitive in my advancing age or I've started enjoying Sunday Morning-esque albums in an ironical way. I'd like to think good music transcends heartlessness.

12. "Holy," Love as Laughter - Good rec from my friend Mark, Sam Jayne is a great indie frontman. These are the kind of songs Jack Johnson thinks he's writing.

14. "Jai Ho," A.R. Rahman (and friends) - A perk of my job is that studios sometimes send me the soundtracks to their movies. I listen to them all on the drive home (I highly recommend navigating traffic to the over-the-top intense score from "The Dark Knight") and that's usually the extent of my interest. But the "Slumdog Millionaire" soundtrack I kept. A.R. Rahman is the John Williams of Bollywood, and the "Slumdog" music perfectly matches the propulsive energy that people are responding to in the film. So much so that when the train station erupts into this dance number at the end, it makes total sense.