This is Why I Own Google's Stock

The Himmelsblog posted a great picture of TomTom & Garmen's stock prices when Google came out with its Navigator functionality today. 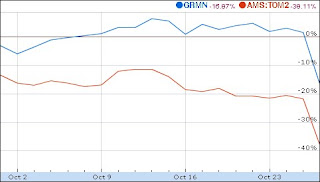 I bought Google's stock last year because 1) They have a monopoly in Search & Search Advertising, and 2) They will dominate Mobile Apps. Seeing #1 wasn't that hard, and frankly, I was late to the party. I should have seen that at the IPO, but better late than never. On #2, I don't think people see this yet, but everytime they announce another app like Navigator, people are going to begin to understand. For me, it hit me when I saw YouTube & Google Maps featured so prominently on the Iphone commercials. Apple wanted to sell phones and they needed Apps to show off. Google's apps were among the best and helped Apple drive adoption. But I don't think Apple is going to spend much time on Apps and Microsoft has proven pretty inept here, so Google is going to own Mobile Apps the way Microsoft owns Desktop Apps someday, with or without Android succeeding.

Building an Apps business like Microsoft requires the ability to invest huge amounts of money in loss leading products like YouTube, Maps & Navigator, because it's not obvious how to monetize them at first. You have to take it in the shorts for a while but as you build critical mass and undercut competitors trying to eek out a living charging for products that you are giving a away at a discount (free), you consolidate the market and then you package it into a suite or bundled service. This is exactly what Microsoft did with Office, with the added advantage that they hooked it into Windows. Google's Search business is so crazy profitable that it can easily subsidize the apps business indefinitely and guess what, Google is launching a mobile OS that they'll be able to use as an anchor for apps someday.

As you can see from my Covestor widget to the right, I've done quite well on Google, but I don't think it's fully valued right now. That doesn't mean I would run out and buy a bunch of stock. I wouldn't. But I would start adding it to my portfolio slowly on weakness. Mobile Apps will be the second leg of Google's growth and I believe it will be very powerful. I don't think the market understands this yet, but someday it will.