One of the great pleasures of living in Russian Hill in San Francisco, is that a large concentration of my friends live here too. I can count 10 friends that live in a 3 block radius of my pad at Union & Polk. I bump into friends on Polk all the time and it's one of the reasons I'm such a believer in Foursquare.

This Sunday morning I staggered out of my apartment with a headache and desperate need for some coffee before discussing the redesign of Ben's Friends with Ben & Eric. Who did I see, but Alex Bain, limping up Union street on a similar mission. He claimed the limp was due to some poor fitting pants, but I think he was embarrassed to admit he might have gotten a little too frisky at a Holiday party the night before. Regardless, it's such a pleasure to live in a neighborhood with my friends for just these type of occurrences. 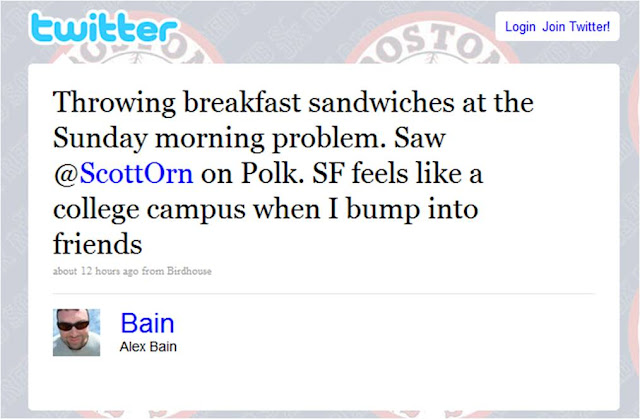