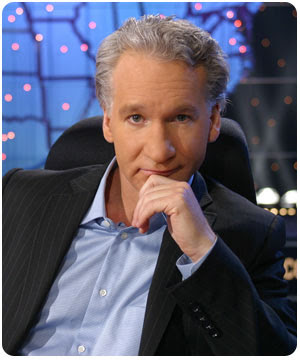 Matt Belloni did a great interview of Bill Maher for the Hollywood Reporter. I'm a Maher fan and love his show on HBO.

There are some interesting thoughts in the piece. One of my favorites is this one on Obama and McAin:

"Obama is going to beat him by more than people think. People will see him with Obama in the debates and he will not look good. And things are bad now. "

I think this is totally underestimated right now. People want to be led by somebody who embodies their best qualities, and looks are one of those qualities that comes into play. I'm not saying it's right, I'm just saying it will happen.

On another note, I love Maher's rants on the Drug industry. He actually has some decent points but he also get's pretty weird and conspiracy theorist. I try not to think about some of this when he is making good points on politics. :)