This week's music post is inspired by the great article posted by Give Me Something to Read called Grownup's Guide to Indie Rock by DJ Palladino. It's a celebration of all things Indie and a lot of the bands covered appear here frequently (look how cool I am!). My favorite quote:

"What’s maybe best about indie rock is its bargain-basement passions: An “expensive” ticket goes for $20. Even here in town, a show like the recent A.C. Newman appearance at SOhO was $12. Pittsburgh’s Black Moth Super Rainbow charged producers $300 to play I.V. Theater just two years ago. Thus, a turnout of more than 50 kids can be considered a successful show. Beach House played at Muddy Waters, pushing the place to its structural limits with around a hundred kids. Though SOhO’s Zamir said it was a nerve-wracking risk to book some of these bands — she dreamed of bringing Animal Collective — she also admitted that all the bands came close to selling out the 300-capacity venue. I saw Arcade Fire at L.A.’s Troubadour for $15 four years ago, practically standing in the band’s lap, with Beck staring open-mouthed next to me. It was the kind of transcendent experience live rock promises but can’t deliver reliably when the players are millionaires performing in arenas." 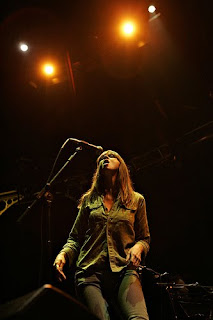 Wilco - Everlasting. This has become one of my favorite songs on the new album. Especially the soft, hopeful guitar playing at the end.

The Shins - Past & Pending. A great B-side. I'll never forget seeing the Shins in a beaten down venue in the middle of winter in Chicago. Winter had ceased to be cute and we took a cab from Mercer's apartment to next to nowhere. Inside, the ceiling looked like it would cave in any moment and the coat racks were impossibly full so we through our jackets in the corner and let lose. But we were seeing the Shins first show in support of their new album, and it was amazing.

Fleet Foxes - He Doesn't Know Why. One of my favorite bands of the last few years and magical concerts at the Fillmore and the Fox. Exactly the kind of show the author talks about in the Indie article.

Cat Power - The Moon. I saw her at the Roundhouse in Camden while studying abroad in London. It's a part of town that reminded me of Berkeley, with it's perfect arrangement of clutter and heart. The Roundhouse's smooth circular shape is an architect's response to the chaos of Camden, and somehow it fits perfectly. I waited to hear Cat Power sing The Moon all night and she played it second to last. That's the beauty of Cat Power, of Camden, and of all these Indie bands, you're never sure what you will get, but somehow, they come through for you.
Posted by Unknown at 6:00 AM