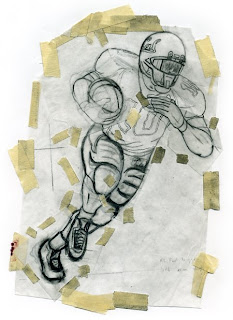 I've accumulated a bunch of good links (using Instapaper - thanks Alex), so it felt like it was time for another Sir Links-A-Lot column. Instead of the customary picture of a knight though, I'm going with Mercer's Marshawn Lynch sketch.

Mick LaSalle posits an interesting theory linking Sidney Poitier & President Obama. I missed the Poitier era, but it makes a lot of sense to me.

Mark Cuban makes an excellent point on the fundamental incentive problem with hedge funds. I'd add that they don't have clawbacks either, which magnifies the problem.

Mark Lisanti is writing a great blog and Twitter posts these days. He used to write Defamer.com. Start checking him out for things like this:

“ I think a lesson for anyone picking a running mate in the future would be not to pick someone who looks exactly like one of the most famous comedians in America."
-- Seth Meyers

Colby Buzzell, who has been featured here many times, spent some time on the cover of Cnn.com thursday. check out his profile on Cnn and his work at esquire.com.

Great observation on Hulu and DVR usage via Loose Lips Sink Ships. Totally agree but I would add Netflix's new Roku box into this equation.

Phonetag's CEO, James Siminoff, makes a great point about why downturns are good sometimes. He articulates one of the fundamental problems I have with the bailout system we have created. Phonetag is a great service, btw. Use this link and we both get a free month of voicemail transcription.

Your reward for making it this far in the post? A song by Conor Oberst, performed with M. Ward and Jim James. Enjoy At the Bottom of Everything and have a great weekend!
Posted by Unknown at 1:34 PM