Kenny Kellogg's Most Popular Posts of 2009

I thought folks might be interested in seeing what the most popular posts on Kenny Kellogg were in 2009. Here is a screen shot from Google Analytics which shows about 22k page views for the year which means about 60 people check out the site every day. Not too shabby.

Btw - thanks for your support. It's great motivation to know that people read the site! The top 10 is below. 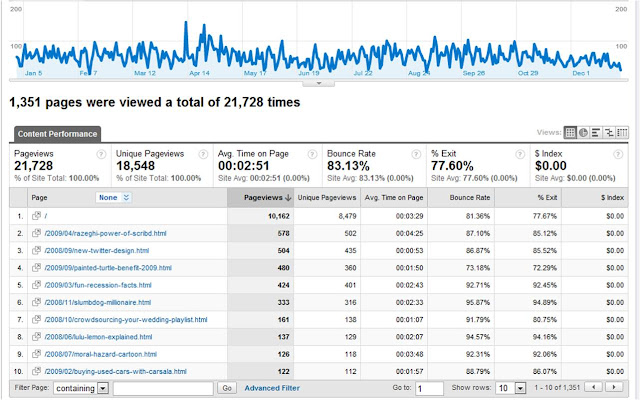 1. Razeghi & the Power of Scribd - the story of how my Kellogg Professor, Andrew Razeghi, used Scribd.com to publicize his thoughts on the recession.

2. New Twitter Design - Molly Mutt made me a new Twitter background and this rocked the Internet. Actually, this shows the power of Search Engine Optimization as I think a lot of people found the blog thinking they were getting a sneak peak at the new Twitter.com design.

3. Painted Turtle Benefit - a fundraiser for one of my favorite charities. I was happy to help raise awareness, plus it was an awesome time! Go next year.

4. Fun Recession Facts - a quick story about saving money by scooping the back out of hotel soap. More SEO at work here, although it's a riveting story and even led the Himmelsblog to create a tumblr page dedicated to pictures of hotel soap.

5. Slumdog Millionaire - great movie. I have a confession. The whole time I thought it was an Indie flick and kept thinking about how "flat" the world of filmaking had become.

6. Crowdsourcing Your Wedding Playlist - Ananda & Aaron did just that. Apparently a lot of other people on the Internet did it too. Great reminder of how awesome their wedding was. :)

7. Lulu Lemon - I'm convinced this will be a big company someday because people are gravitating towards wellness and sports that promote it. Still haven't bought the stock though.

8. Moral Hazard Cartoon - great cartoon and no shock that in a year of huge government bailouts, that Moral Hazard was something that people wanted to learn more about.

10. WWDDD - What would Don Draper do? The main character of my favorite show, Mad Men. So glad it made the Top 10.

Thanks again for reading day after day!!!
Posted by Unknown at 6:00 AM