Last night I was the guest of Alex & Lisa Bain at the Counting Crows concert in Berkeley. Great concert and a lot of good Berkeley memories came back. We were in the 4th row! I was actually nervous Adam Duritz would make fun of me because I was wearing a red shirt, and any CAL fan knows you shouldn't wear a red shirt to the Greek. 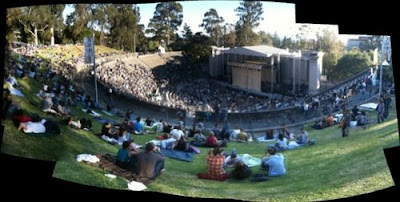 Before the concert, I took Alex up to the top of the Greek where we could see all of Berkeley and the Bay. He took this shot looking down on the crowd from our perch.

They opened with a Van Morrison cover which was awesome and closed with Mr. Jones and then a cover of This Land. Great show.
Posted by Unknown at 9:56 AM