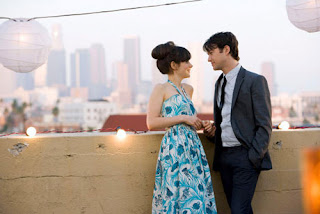 I went to the Kabuki with Coles & Steph Mann on Sunday night. We were all set to see the Hangover, but somehow this long into its release, it was sold out. Holy cow. Probably another couple of weeks of not being able to participate in Hangover Movie Line male bonding.

But...we did see 500 Days of Summer, with noted crush, Zooey Deschannel. She was awesome. Actually, the movie is pretty much a commercial for how awesome it would be to date her, except for the pesky fact that she is acting to a script designed to further my crush.

The movie surprised me though and it was really good. Matt Belloni wrote a great review of it in Esquire this month and this quote from the story summed it up.


"It's the least-romantic romantic comedy of the summer, and it works precisely because it refutes everything romantic movies stand for."


I emailed Mat from the theater for his take because I wasn't sure I wanted to see it and he had a good point:

"its a unique romantic comedy because it's from the guy's perspective."


He has a good point, most romantic comedies are designed to appeal to women and from a women's perspective. 500 Days is a winner that guys will enjoy.
Posted by Unknown at 6:00 AM