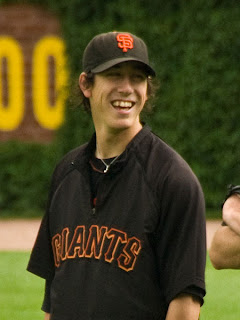 "Why Tim Lincecum is the best: As some 8,000 Little Leaguers had AT&T Park to themselves around 10 a.m. yesterday morning, Lincecum was among several Giants who answered their questions. As the session drew to a close, a tiny boy, maybe seven years old, took the microphone and asked Lincecum, "Can I have a hug?" After the laughter died down, Lincecum stepped down and gave him one. Priceless."
Posted by Unknown at 6:00 AM