Today's Friday Chill Music centers around an article titled Boys' Choir by Sasha Frere Jones in the New Yorker . He discusses the new trend in more harmonic sounding Indie rock through a profile of Grizzly Bear. 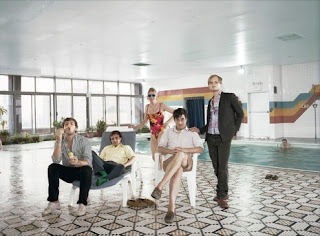 "Within the genre of indie rock, the move toward more singing done by more voices in a more articulated harmonic framework began somewhere in the early aughts, with artists like Sufjan Stevens, who became known for records like “Greetings from Michigan” (2003) and “Illinoise” (2005); both feature elevated, multilayered vocals. (His 2006 collection “Songs for Christmas” dramatically altered the well-known harmonies of Christmas carols.) In the past several years, St. Vincent, Fleet Foxes, Bon Iver, and Beach House, among others, have found vitality in massed vocal arrangements that sometimes have little to do with rock, and even less to do with a masculine rock voice."


Bon Iver & the Fleet Foxes are two of my favorite bands and I've recently discovered Grizzly Bear. I love this genre and thought I would share some selections with you. I hope you enjoy.

Fleet Foxes - Blue Ridge Mountains
Posted by Unknown at 6:00 AM