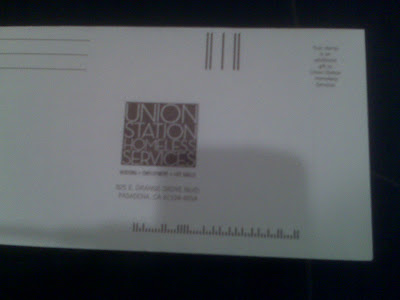 The cool thing about the Internet and blogging in general, is that when someone does something cool or out of the ordinary, you can call it out. People who have a "Nice Touch" deserve more attention. That's why I'm posting this picture from the envelope of a Union Station Foundation contribution envelope.

Union Station is a Foundation that helps people who are homeless or have serious problems. A relative of mine found herself in a very tough situation a few years back. A Union Station affiliated house took her in and helped her overcome some challenges and get a normal life started. I'm forever indebted to those fine folks and make donations in her honor when I can.

That's why I have the envelope, what makes it cool is the wording in the stamp area. It says, "Your stamp is an additional gift to Union Station Homeless Services." Such a nice thought to recognize the small, but additional gift of the 40+ cents of a stamp. I bet that helps their conversion rate just a little bit more and it validates the nice act that a donor is making. A nice touch.
Posted by Unknown at 10:00 AM